Zacheis Planetarium opened in the fall of 1964, following a year of fundraising. The building was completely funded from private gifts. 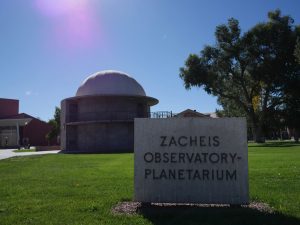 Named for the first Adams State Foundation President, Harry Zacheis, the planetarium began providing free shows to the community in spring of 1965, and continues through today.

In 2012, the planetarium under-went a remodel, funded by a U.S. Department of Education’s Hispanic Serving Institutions STEM grant. The HSI-STEM grant supported a $400,000 renovation of Zacheis Planetarium, including installation of a brand new, top-of-the-line dome screen and a modern digital, full-dome projection system.

The planetarium provides out-reach to regional schools and the general public by offering free movies. The idea to add a planetarium to the Adams State campus came to Dr. Fred Plachy, emeritus president, when Dr. Walter Orr Roberts, then director of the National Center for Atmospheric Research, delivered the commencement address in 1957. 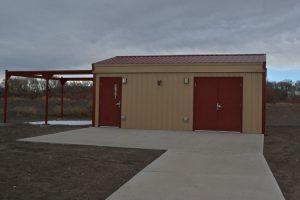 The Adams State Observatory is located on the north end of campus between the softball and baseball fields by the Rio Grande. Parking is available on the west side of Stadium Drive or in a parking lot. There is no parking at the observatory.