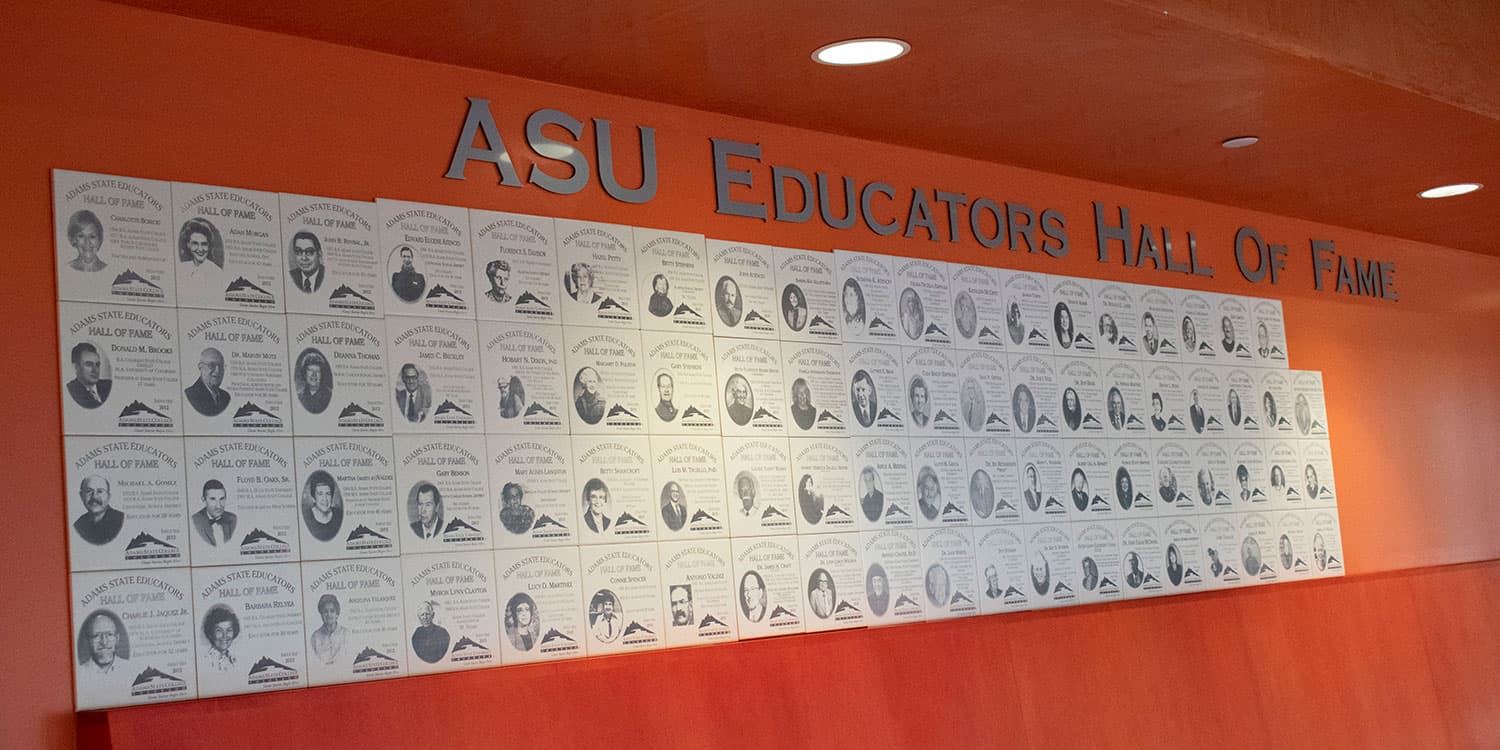 The Tenth Annual Adams State University Educators Hall of Fame ceremony inducted the Class of 2021 and Class of 2022 on June 7, 2022.

Tamara “Tami” Fassett received her bachelor’s degree from Adams State College in 1990. Tami taught middle school and one class of high school English at Center Schools, and also taught high school English and theater at Monte Vista High School. During her tenure at MVHS, she directed 40 productions; and continued sponsoring and directing the plays for years following her retirement in 2008.

Bobby Jones earned an Adams State Bachelor of Arts in 1973 and served as an industrial arts educator, at the secondary level, for 29 years. His best memories are of students who had gone on in woodworking.

Patricia Langston graduated in 1964 from Adams State with a master’s degree and dedicated her professional career to teaching home economics, marriage and family living, and child care and development for 35 years. At Alamosa High School she sponsored the Future Homemakers of America (FHA) and several of her students became state and national officers. The FHA club ran the concession stand at many football and basketball games often selling treats made in class. She received her bachelor’s degree from Oklahoma Women’s College in 1951.

After earning a Bachelor of Arts from Adams State in 1977, Carey Sanchez later received a master’s from the University of Northern Colorado in1988, and a master’s from the University of Phoenix (Denver) in 1997. Sanchez treasures the many wonderful memories in her forty-four-year career. Highlights include former students remembering activities. They were inspired and excited about the books they read, the Bronco stats and geography they worked on every Monday morning, listening to music (mostly the Beatles) playing in the background as they did their tasks, or the field trips to Washington DC.

Over the course of his career, Kurt Cary was involved in education at all grade levels and coached baseball, football and wrestling. He earned his Adams State Bachelor of Arts in 1971 and Master of Arts in 1978. He dedicated more than 40 years to education.

For several years, Dennis Lopez, Adams State Class of 1974 and 1978; was master of ceremonies for the Adams State Educators Hall of Fame. His unexpected passing in February, 2022, was a great shock to his community. He was inducted into the Hall of Fame (posthumously). He had 27 years of educational service. He began his teaching career at Alamosa High School, became associate principal in 1993 and principal of AHS and the Open High School from 1998 through 2002. He was also the secondary principal at Sierra Grande School District. In his professional capacity as an educator, he was a member of the Alamosa Education Association and National Education Association. Lopez also earned a type D principal/administrator certificate from the University of Denver.

Matthew Mann (posthumous) dedicated his professional career to education. He earned an Adams State bachelor’s degree in 1994. He earned his M.A. and Ed.D. degrees from Texas A & M, Kingsville. Mann secured his first teaching position in the Sierra Grande School District. He continued as a public-school teacher after moving to Texas. He later became an assistant principal and principal at Pleasanton High School before being named superintendent in 2015. Mann wrote his doctoral dissertation on the relationship between school district size and science performance. He presented at national and state level educational conferences and published four articles on various educational topics.

Clinton Tucker spent 31 years in the field of education, 15 as an educator and 16 as an administrator. He graduated from Adams State with a bachelor’s degree in 1968 and master’s in 1974. Tucker started his educational career teaching and coaching for Sanford School District, as well as Alamosa High School and North Conejos School District. He also served as the principal for the North Conejos School District for 16 consecutive years. He served on the committee for the Conejos County Child Protection Team for 16 years. He is most proud of his part in the construction and implementation of a curriculum and program for Centauri Middle School.

Edward Richmond (posthumous) graduated from the Chicago Conservatory in 1949 with his B.A. degree followed by, in 1954, his M.A. degree. He was an educator for 28 years. The admiration and appreciation of his students is evidenced by the establishment of the Adams State Richmond Memorial Scholarship for music students; established by donations from his former students, as well as the memorial concert his students organized and performed after his passing. Very early in his career he directed the Michigan State Men’s Glee Club. The Glee Club was one of the premier organizations of its kind in the country, appearing on both the Ed Sullivan show and the Dinah Shore show, and regularly touring nationally.