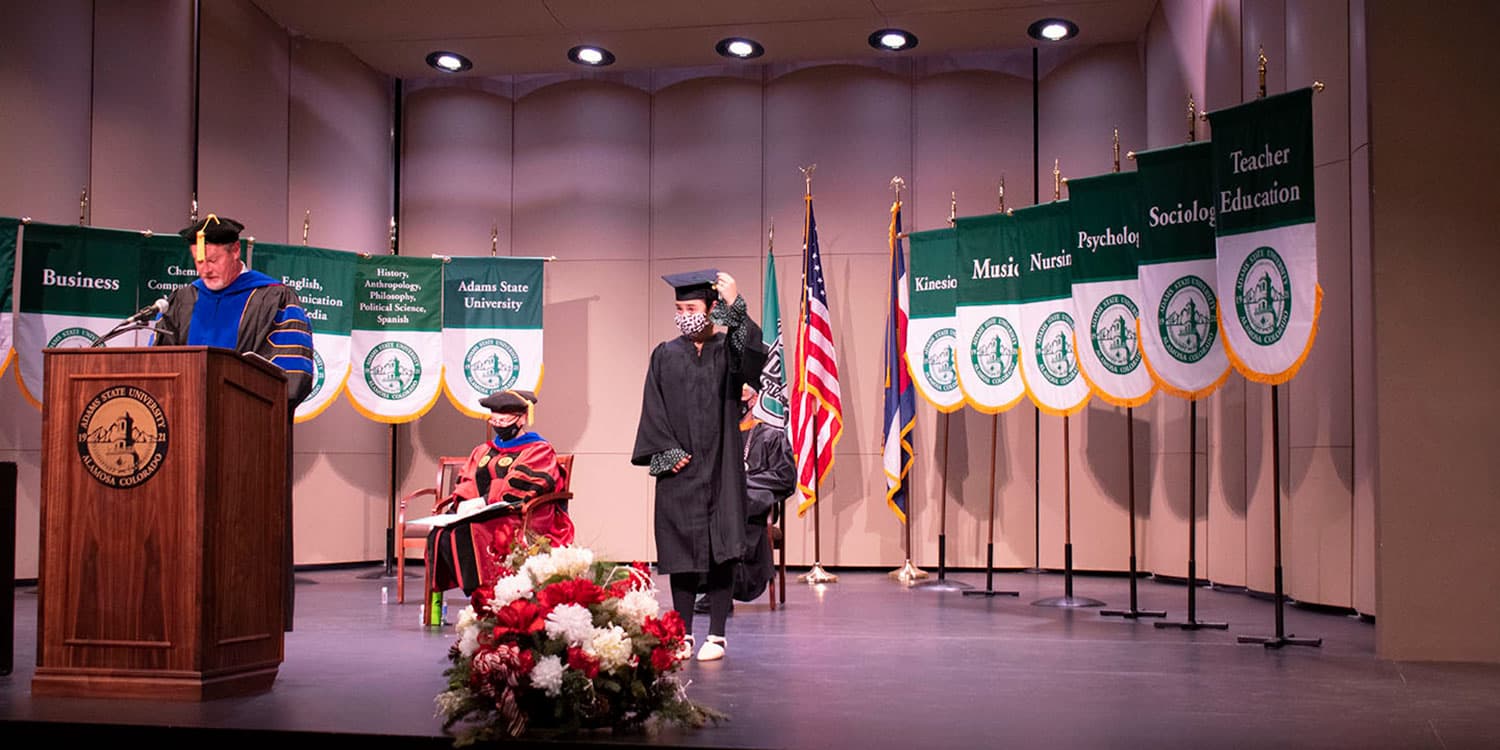 The most recent graduates from Adams State University received heartfelt congratulations and inspiring words of wisdom during the 2020 Fall Virtual Commencement Ceremony held on Saturday, Dec. 5.

“We’ve accomplished something that would have been difficult, pandemic or not,” said Erika Steenburg, who earned a bachelor’s degree in geosciences and served as the student commencement speaker. “We are without a doubt part of the history being written this extraordinary year. But the speech isn’t just thanks and congratulations. It’s about who we are, where we’re going and who we will be when we get there.”

Steenburg, a native of Alamosa, was joined on the commencement stage by Rosalie Martinez, the first female executive in Adams State’s history, who served as the fall commencement speaker. A 1986 graduate of Adams State, Martinez relayed a story of how Adams State helped her overcome her own fears and taught her how teamwork and trust can be empowering.

“I think fear is a big part of the formula for success,” Martinez told the graduates. ‘If you don’t step out of your comfort zone, you’re never going to find out how much more you might have accomplished.

“So never doubt yourself. Get out there and give it a try. And when you get there, I want you to remember one thing — pay it forward. For it is only in your generosity and willingness to help others that you’ll find the true successes of your life.”

Adams State awarded 233 degrees including 134 associates and 99 bachelor’s degrees during the ceremony. Over 30 percent of the graduates identify as first-generation and 55 percent are from Colorado with 27 percent from the San Luis Valley.

There is no comparing the atmosphere of the staged virtual event in Richardson Hall Auditorium to a typical in-person ceremony, which is filled with excited graduates and proud family and friends. However, as Adams State President Cheryl D. Lovell said, despite unpredictable and unusual circumstances over the last several months, the graduating class stayed on task and pushed through difficulties. “Now here we are, maybe not if person, but definitely in the true spirit of honoring our newest graduates.”