A commitment to Alamosa, a degree from Adams State, time teaching high school social studies in Center, Colo., a stint serving in the Colorado National Guard, and experience running a small business will all help as Mark Martinez commits to his new position on the Adams State University Board of Trustees, to which he was appointed by Colorado Governor Jared Polis.

“Because I’m local, I’ve seen where Adams State has been, seen where it has been going, recently, and it’s one of those things that if I’m going to be committed to it, I need to be all in,” Martinez says.

Adams State is a symbol to young people in the San Luis Valley, according to Martinez, to which he hopes to contribute. “I’m recognizing just how important the college is to the community.”

He has no big changes in mind for the school initially, and plans to talk with people, such as employees, who know Adams State well, to gather information to use in his role as trustee. 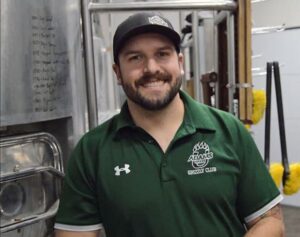 Martinez appreciates the small class sizes at Adams State and is glad he got to be intimately familiar with faculty in the Earth Sciences (now known as Geosciences) Department, crediting the late Rob Benson, Ph.D., emeritus professor of geoscience, and former Adams State professor Jared Beeton, Ph.D., for their interest and attention.

As co-owner of Square Peg Brewerks in downtown Alamosa, Martinez uses lessons from his time at the university every day.  He graduated in 2013 with a bachelor’s degree in physical geography.

Martinez recalls teaching an economics class on entrepreneurship in Center and using a business plan to start a brewery as an example. “You need to just do this,” he says the students told him. “The best time is always now.” He now occasionally sees those former students come in for a beer and tell him they remember that specific moment. “It’s inspiring for them to see me doing this now.”

Martinez brewed beer at home and had enough early success and fun in the process that his interest carried on and stayed a passion. When his lifelong friend Derek Heersink had some extra barley from his farm, they decided to have it malted locally and use it to brew beer themselves.

Martinez and Heersink extensively renovated their location, one of the few privately-owned art deco style buildings in Colorado. They did the work themselves and used unusual but simple materials, such as wood from a historically significant cabin in La Veta, which had been used as a cache for 7th Cavalry members from Ft. Garland in the late 1800s. Square Peg Brewerks opened at 625 Main St., near San Juan Ave., in June 2017.

“I always encourage people to do the thing that is in the back of their head,” according to Martinez. “That little itch, whether it’s travel or career opportunities, take those risks when you’re young,” he says. “However small it might be, you should do what makes you happy.”