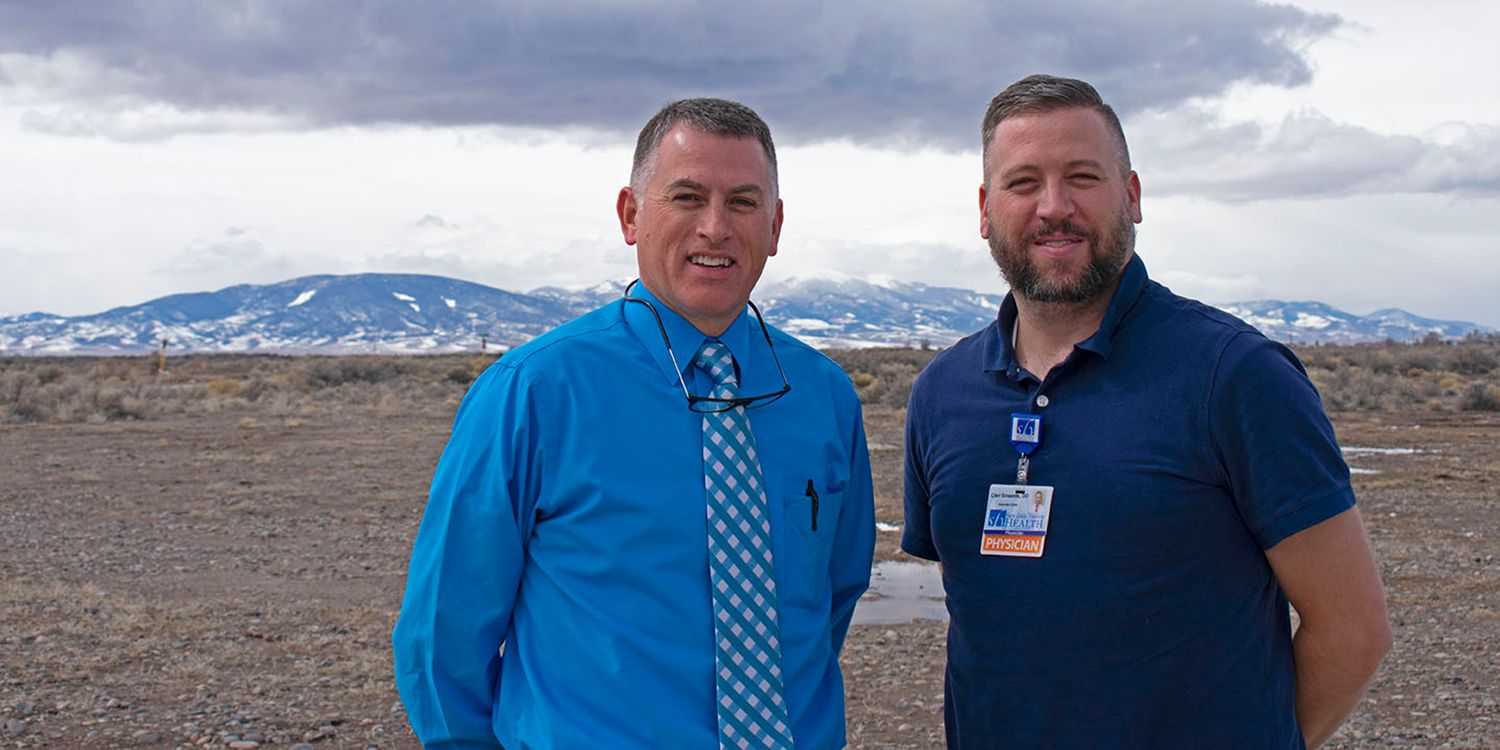 Two brothers from the San Luis Valley dreamt of becoming doctors. With a lot of hard work, a supportive community, and a great undergraduate education at Adams State University, that’s exactly what they did.

The Alamosa Rock Creek Medical Clinic feels more like a home than a doctor’s office. The waiting area has the inviting atmosphere of a living room. Chaps, vintage photographs, and worn bridles adorn the walls, a nod to the legacy of frontier life, hard work, and strong familial connections that represent the values of its principal physician – Dr. Martin Sowards.

Likewise, the patient rooms convey warmth and caring. Each has its own theme, including the one decorated with Sowards’ family mementos.

Speaking of family, not far south of the office, Dr. Clint Sowards, greets strangers as though they’re old friends at the San Luis Valley Health Clinic in Antonito.

Two brothers. Two doctors. Though 17 years separate them in age, they chose similar paths. Both began their journeys in the San Luis Valley. Both attended Adams State and completed bachelor’s degrees. Both earned their medical degrees following Adams State. And both returned home to support and care for their community.

A Physician from the Farm

Raised on the family farm in Bountiful, Martin Sowards contributed to his share of the workload, every day completing chores. Growing up on a ranch, he enjoyed working with the livestock, including pulling calves. He originally imagined becoming a veterinarian, like his uncles, until one said that if he could do it over again, he’d become a physician.

After graduating Centauri High School, Martin enrolled in the pre-medicine tract at Adams State and graduated in 1992. Because of the guidance and tutelage from his professors, he was well-prepared for medical school. “I was heads above everybody,” he says.  During this time, he realized he wanted to be a doctor for people.

Martin earned his medical degree from the University of North Texas Health Science Center at Fort Worth, then made the decision to return home. “I love the San Luis Valley, and who can take better care of the Valley people than a Valley person,” he says. “There is a certain mentality here: ‘Patch me up and let me get back to work.’”

The decision to practice family medicine brings unique challenges and immense satisfaction. Every patient is different, and Martin wears different hats as he treats depression, heart disease, diabetes, fractures, and more. He tries to treat everyone, but when he feels a patient is better served by someone else, he’ll recommend a specialist so they’ll receive the care they need.

A fixture in the community, Martin enjoys reconnecting with his mentors, as a fly-fishing partner and sometimes as their doctor. “I am very happy being a physician,” he says. The community, and family, are very important to him. His wife, Lorna, has been the biggest influence in his life during the past 30 years (and the interior designer for the Alamosa Rock Creek Medical Clinic).  “I would not be where I am today without her,” he says. Today, they have five children — Lindsey, Heather, Emily, Tara, and Evan – three grandsons and a brand-new granddaughter.

Family is also very important to Clint Sowards. Perhaps it was seeing the joy his brother received from his chosen career that inspired Clint to follow the same path. “Martin was my first mentor,” he says.

While enrolled at Adams State, where he graduated in 2010, Clint worked for his brother at the Rock Creek Clinic, learning how to take vitals, communicate with insurance, and draw blood. “I experienced my first taste of helping friends and family,” he says. To this day, Martin still keeps a name tag in his desk drawer that reads ‘Clint Sowards, Clinic Assistant,’ and he’s quick to say “Clint is the smartest of the bunch. He has a very bright mind.”

He felt good about meeting his goal, calling it both a freeing and a somewhat terrifying experience to leave the educational support system. Still, he has a strong family support system and continues to apply lessons learned from his first mentor. “From 4:15 p.m. on, Martin would return patient phone calls, and I now practice with that same integrity,” he says.

Clint also credits his professors at Adams State for their guidance and support. “When we graduate, it is a celebration of everyone’s success,” he says, encouraging current pre-med students to remain dedicated to their dream. “I did it, sailing into uncharted territory with bumps in the road,” he says. “Current students can access internet step-by-step instructions on how to become doctors. You can make it happen.”

Like his brother before him, Clint also started a family while studying at Adams State. He and wife, Alisha, also a 2010 Adams State graduate, worked while taking classes. Living close to the academic buildings and being able to walk to class, for a young married couple, was perfect. “Without her support, I couldn’t have done it,” he says.

Today, they have five children: Beijah, Slade, Blayzen, Vashti, Marstyn, and one due in June.

Although Clint Sowards doesn’t consider himself a leader, he is outspoken and has no problem saying what he feels. “As a physician, you are looked at differently, and I am happy to try and help in any way I can.” He is active in the community as a volunteer coach for city leagues, and he enjoys working with the youth at his church.

Both brothers share the idea that little about them is not known to others. “If you know me, you know me,” says Clint.

Another thing they agree on — Adams State contributed to their professional success and personal fulfillment. They encourage local high school students to attend Adams State, as well.

“It will prepare you as well as more expensive options,” Martin Sowards said.

“I love Adams State,” said Clint Sowards. “My professors were as dedicated to my education as I was.”

Editor’s note: Adams State is now accepting applications into its pre-med program for fall 2019. The University offers an assortment of other pre-health degree programs as well, including pre-veterinary, pre-pharmacy, pre-dentistry and pre-physician assistant. To learn more visit adams.edu.