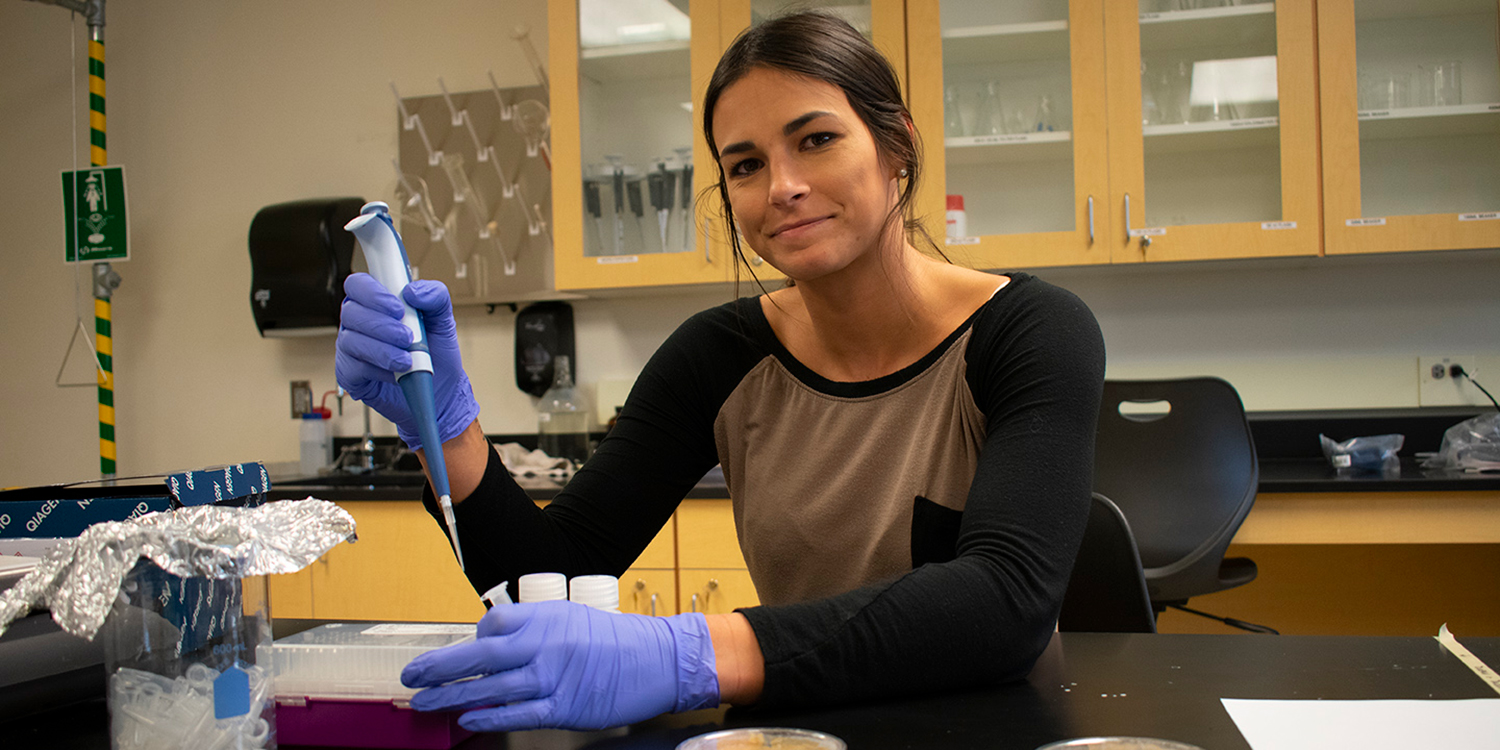 As far back as ancient Greece, mistletoe has been associated with magical properties. Adams State University biology student Paitton Heltenberg is seeing the plant differently.

Heltenberg, teaming up with biology professor Kristy Duran, Ph.D., is conducting research on the once considered sacred plant, with her study strictly looking at properties of the parasitic plant and its effect on Piñon and Ponderosa trees located in the Rocky Mountains of Southern Colorado and Northern New Mexico.

Heltenberg says working on a research project as an undergraduate student will help prepare her for graduate school and eventually her own Ph.D.

“One day I hope to receive a Ph.D. and begin a professional career in researching cancer treatments. I am learning more about cells and their functions and extracting DNA, which will be helpful for future research. The project has also helped with my mycology class at Adams State.”

Although the North American dwarf mistletoe isn’t the same plant that earned a place in the folklore of early civilizations, it does have many mysteries to unlock for scientifically-minded students like Heltenberg.

According to Duran, fungi can actually help its host tolerate other potential damaging conditions. Studies have shown that endophytic fungi may help plants actually tolerate drought and protect against herbivores. The dwarf mistletoe-pine system is interesting because infection puts trees under drought-like conditions and may mimic the effects of herbivory.

“We wanted to work with a project that hasn’t been carefully studied,” Heltenberg said. “There is so much fungus can do. It may differ in the host depending on a variety of factors. If you spray the pine with an agent to make it go from a non-pathogenic state to a pathogenic state, it can kill the mistletoe but not harm the pine at all. This could be a serious control agent against mistletoe and help protect our forests.”

Duran guides the research and helps Heltenberg when she isn’t sure of the next step. “We are learning together,” Duran said. “I have never done this type of analysis.” Their project studies fungi, which has grown out of their hosts. From skills learned in microbiology class, Heltenberg uses aseptic techniques to create pure cultures of endophytic fungi.

Professor and student worked this summer taking needles from infected and uninfected trees as well as from mistletoe shoots. They put the specimens on agar plates and let them grow, and then selected different types of colonies and transferred them to their own plate.

“We grew them out of the needles and twigs and then isolated them to extract their DNA,” Heltenberg said. “It is so crazy how we can’t see all this microscopic fungi with the naked eye and when we encourage the growth, all these fungal communities live inside there.”

After extracting the DNA, using a DNeasy plant kit and amplifying a portion of the DNA, they send the specimen to a lab to be sequenced. “Once the results return we use a database to identify the species of fungus,” Heltenberg said.

Heltenberg, a major in organismal biology and president of the Adams State Society for Advancement of Chicanos/Hispanics and Native Americans in Science (SACNAS), plans to graduate in 2020. The research she is undertaking adds to her full Adams State experience.

“Paitton is a lot of fun to work with and very enthusiastic and interested,” said Duran. “She gets as excited about the research as I do.”