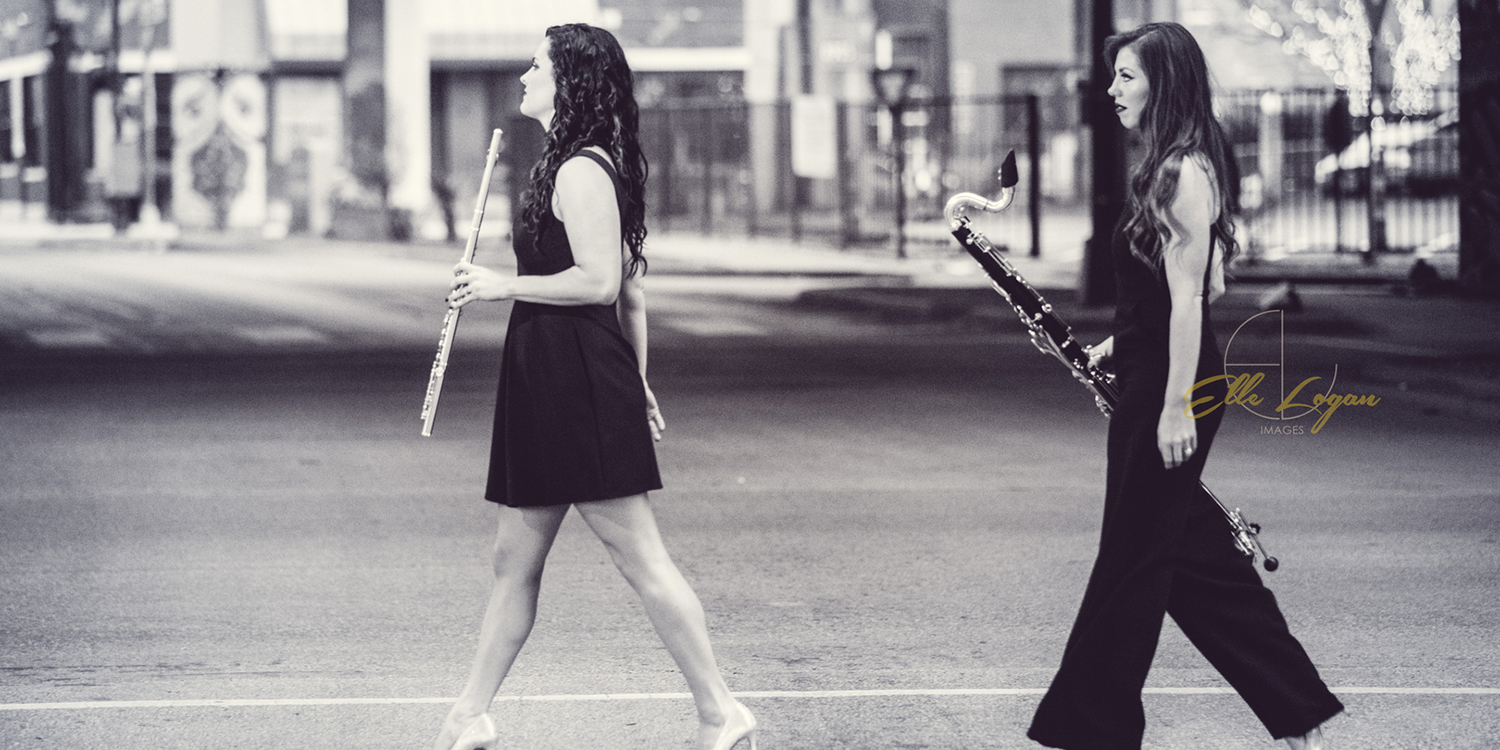 Home » News » Woodwired to perform at Adams State on March 14

The Adams State University Department of Music presents Woodwired, a contemporary flute & clarinet duo who perform using live looping software and electronics. The concert will begin at 7 p.m. Thursday, March 14, in Leon Memorial Hall. The duo will also work with ASU music majors in masterclasses and clinics throughout their residency.

Described as “fabulous, adventurous, and spellbinding,” (KSZU Stanford Online) WoodWired is a contemporary duo based in Dallas, Texas. They perform contemporary and classical music, creating upbeat, fresh sounds that represent a fusion of jazz, classical, and pop genres. WoodWired “takes jazz/classical/electronic music to the next level of the game.” (Midwest Records) WoodWired is known for their groundbreaking use of live electronics in a chamber music setting. They are quickly gaining popularity in this genre, presenting a truly unique sound. The duo’s music is not only popular in concerts and residencies at universities and conferences around the country but also works equally well in more intimate informal settings.

WoodWired’s debut album, In The Loop, was released in March 2018 under the University of Texas-Arlington Record label. Described as a “true virtuosic tour d’force” (Audiophile Audition), this album features almost entirely original compositions written by WoodWired. It was featured on multiple platforms, including being named Jazz Weekly’s “Ringer of the Week” and topping the Classical/Experimental chart on Stanford Zookeeper Online in July 2018.

Dr. Hannah Leffler, a Miyazawa Emerging Artist, has held flute faculty positions at Luther College, University of Northern Iowa, Northeast Iowa School of Music, the Lutheran Summer Music Academy and Sounds of Summer Institute, and numerous high schools and middle schools in the Dallas-Fort Worth metroplex. She currently resides in Texas, where she recently completed her Doctorate of Musical Arts degree in flute performance at the University of North Texas and worked as Teaching Fellow. Her primary teachers at UNT were Professor Terri Sundberg and Dr. James Scott. She has been a featured guest artist and clinician at numerous schools and events across the Midwest, including the Exploring Chamber Music Festival held at the University of Northern Iowa. She performs frequently with the Fort Worth Symphony Orchestra and the Oklahoma City Philharmonic  and has been a principal substitute flutist for the Waterloo-Cedar Falls Symphony Orchestra and the Dubuque Symphony Orchestra. She is a current member of the Movēre Woodwind Quintet, comprised of Lutheran Summer Music Festival faculty. In addition, Hannah is the founding member of WoodWired Duo, an electroacoustic duo with bass clarinetist Cheyenne Cruz.

Dr. Cheyenne Cruz joined the faculty at the University of Texas at Arlington in 2016 as Lecturer in Clarinet and Music Theory. Cheyenne was recently named a Buffet Performing Artist, and holds positions as the second clarinetist in the Texarkana Symphony Orchestra and bass clarinetist in the Longview Symphony Orchestra. Previously, she was the Adjunct Clarinet Instructor at Stephen F. Austin State University, and was the Teaching Fellow in chamber music for the University of North Texas. Cheyenne completed her DMA in clarinet performance with a related field in music education at the University of North Texas in 2015. She also holds a master’s degree in clarinet performance from the Florida State University and a bachelor’s degree in music education from McMurry University.

As a soloist, Cheyenne recently performed Scott McAllister’s Black Dog concerto with the UTA Wind Ensemble at the Texas Music Educator’s Association convention (TMEA) in February 2017.  Within the context of a larger ensemble, she has appeared with the Dallas Winds, the Lone Star Wind Orchestra, the Tallahassee Symphony Orchestra, the San Angelo Symphony, and the South Arkansas Symphony Orchestra.  An active chamber musician, Cheyenne has competed in both the Plowman and Fischoff chamber music competitions. Currently, she is a member of the Madera Wind Quintet where she performs alongside her husband, bassoonist Jorge Cruz. In addition to those traditional ensembles, Cheyenne is now composing and playing amplified bass clarinet in WoodWired, an electroacoustic duo with flutist Hannah Leffler. Described as “fabulous,” “ adventurous,” and “spellbinding,” WoodWired uses looping software and other live electronics to perform original music, creating upbeat, fresh sounds that represent a fusion of jazz, classical, and pop genres. WoodWired’s debut album, “In The Loop”, was released in March 2018 under the University of Texas-Arlington Record label.

In addition to her performing ventures, Cheyenne has been published in The Clarinet Magazine, the monthly journal issued by the International Clarinet Association, with an article entitled “A Pedagogical Guide to Playing Bass Clarinet in a Wind Ensemble.” Prior to that, she completed an undergraduate thesis entitled “Mickey Mousing Squared: Postmodernism in Cartoon Music” for which she graduated with special honors in Music History. Her major clarinet teachers include Dr. Kimberly Cole Luevano and Dr. Frank Kowalsky.

Tickets are $5 for adults, $1 for students and seniors, and free to AS&F and are available at the door.